The debate about Thai Prime Minister Yingluck filing a case against the Thai Rath cartoonist, Chai Rachawa, after he made what can only be termed a misogynistic and clearly malicious defamation against her, is reaching absurd proportions.

First of all, let me be clear, I think she would’ve been better laughing it off with a joke about this obvious little squirt being scared of strong women – “maybe his grandmother used to spank him when he was a boy, who knows?” – something like that. 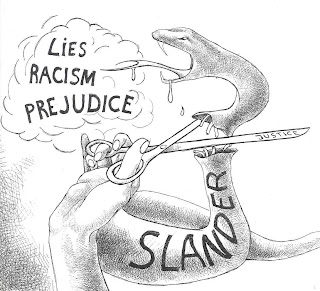 However, I also understand her need to protect herself from smears, libels and defamations. And let’s be frank – the extreme rightwing and anti-democracy movements that make up the opposition to Yingluck’s democratically elected and popular government are filled with racists, misogynists and fascists.

So, she finally had enough and used the defamation law to protect herself.

Let’s be clear – Thailand’s defamation law is open to ALL Thais. Yes, it is used far too often to shut up critics (how many cases have the Democrats and Constitutional Court now filed against Pheu Thai and the Red Shirts? Must be in the dozens and isn’t it weird how Thailand’s fake “liberals” have ignored all that?) but it doesn’t come close to 112 as a law suited only to political purposes. Only an idiot or someone with an agenda would claim that Yingluck’s use of the defamation law is equal to 112. In fact, it’s such an absurd claim it actually denigrates the lese majeste prisoners who are rotting in Thai prisons, serving real jail time.

I should also add that defamation is criminalised throughout Europe and in 17 US states. In many other countries where libel and defamation is settled via civil law the kind of malicious defamations and smears that have been used to denigrate Yingluck would get many newspapers sued out of existence. This notion that democracies can only function when we allow all defamation, hate speech etc is complete and total garbage and the argument of a delusional teenager.

Of course having an argument about whether Thailand should have criminal defamation laws is another debate completely. What I would say is that in countries with civil defamation laws the only people who end up able to sue are the very rich.

So please – less hyperbole, less self-promoting, more reasoned debate and lets stick to the facts.
Posted by Asia Provocateur at 06:25