Korn compares Thai government to Hitler: has he lost his mind?

About 18months ago I interviewed Thailand's then Finance Minister, Democrat Party Deputy Leader Korn Chatikavanij - my interviews with him can be found here and here.

On the two occasions that I met Korn I found him to be erudite, articulate and willing to engage on a number of subjects and policy details.

A dual-British/Thai national, the UK-born Korn attended Winchester College and later studied politics, philosophy and economics at Oxford. Urbane, well-educated and with a cosmopolitan air, it's hard not to be impressed by Korn, not least because at roughly 6ft 4inches tall he has quite an imposing physical presence as well. While I disagreed with him on a number of subjects I found him personally charming and certainly likeable.

So, his comments on his Facebook page today (see screen grab in Thai just below) come as a complete shock. 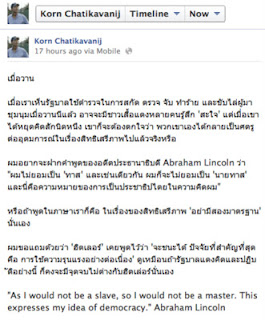 In a rambling monologue Korn complains about the government's handling of this weekend's Pitak Siam protests. Utilising that tried and tested logical fallacy - the false equivalence  - he states that the government used the police to assault the protesters and that the Red Shirts abandoned their own principles by supporting such actions.

Of course the simple facts that Pitak Siam's publicly stated aims were to destroy democracy and create conditions for a military coup are oddly missing from Korn's narrative. Also the fact that the Pitak Siam protesters drove a large truck directly into police lines and attacked them with sticks and other weapons. Then there's the tiny inconvenient detail that the present ruling government party, Pheu Thai, has an overwhelming parliamentary majority, something his party has not achieved in its 66years of existence. Absent too is that when the government he served in were faced with Red Shirt protesters in 2010 they sent Army snipers onto the streets and shot nurses and school children.

But it was the final part of Korn's rambling comment that raises questions about his mental state.

Using an arcane Adolf Hitler quote (is it only me who finds it odd Korn could quote Hitler so readily?) Korn states that

"The Red Shirt government thinks and behaves like this [like Hitler] - therefore they will end up the same as/not different from Hitler."


To make this bizarre claim is straight out of the nuttiest Thai extremist handbook. The Second World War killed almost 70million people, unleashing unspeakable horrors and crimes on the world. Hitler committed the worst of these crimes, including the terrible slaughter of 6million Jewish men, women and children and 12million Soviet civilians.

It is an utter obscenity for Korn to make a comparison between firing a dozen or so tear gas grenades at violent protesters and Hitler's genocidal slaughter of millions. He should not only be widely ridiculed for making this comparison but condemned as well.

I am quite right to question his sanity in such circumstances and can only hope he sees the error of his ways and offers an immediate retraction and apology.
Posted by Asia Provocateur at 12:39