UPDATE: This story is now confirmed beyond all doubt. The headteacher of the school Yingluck's 11year old son attends has sent out an email to concerned parents ADMITTING that a pupil has been the target of protests by Democrat Party supporters at the school. Khao Sod have screen grabs of the email here - look down the right-hand side of the page. It is also inexcusable that NO foreign media have covered this story - it seems too many of them are interested in posing for the cameras and putting out stories of their own "heroism" than accurately recording the context of Thailand's political crisis

UPDATE: Thai Democrat Party deputy spokesperson, Mallika Boon, has expressed support on twitter for the harassment campaign directed at PM Yingluck's 11year old son. She states that it is a "good thing" because he can then go home and "ask his mother" why this is happening to him. It's hard to know how to respond to the Democrat Party anymore. They've clearly lost their minds.

We can also ask if the Democrats officially sanctioned Mallika's support for the harassment - unless Mallika is removed from her position as deputy spokesperson and Abhisit apologises for her comments we can assume harassing an 11yr old child is something directly supported by the Democrat Party leadership.

One of the best-selling and most respected Thai national daily newspapers, Khao Sod, are reporting a simply horrific story from Bangkok.

They've started to threaten and harass an 11year old child. 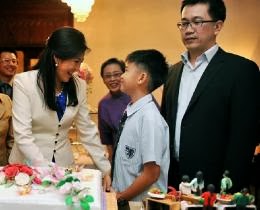 Khao Sod are reporting - and I only have a partial translation available at the moment - that the out of hours tuition school where PM Yingluck's 11year old son attends has received a bomb threat.

Whilst over at Yingluck's son's day school Khao Sod are also reporting that a black truck with Surat Thani number plates - Surat Thani is Democrat Party stronghold - parked up outside the school and its occupants, all dressed in the usual blackshirt clothing of the Democrat Party mob, began to talk to people at the school

In addition to this Democrat Party-supporting parents of other children are harassing and hurling abuse at PM Yingluck's son as he and his escort arrive at his day school.

Is this what the Democrat Party means by ending the "Thaksin Regime"? Attacking and threatening children?

It's a vile new low even by their wretched standards.
Posted by Asia Provocateur at 07:02