A former Thai government minister and long-term ally of Thaksin Shinawatra, Jakrapob Penkair needs little introduction to regular Thai-watchers. After being threatened with Thailand's notorious lese majeste laws and after the first wave of mass Red Shirt protests in 2009 Jakrapob moved to Cambodia where he is still living today.

However, despite his self-imposed exile Jakrapob remains one of the most articulate, erudite and interesting thinkers/voices on the Red, pro-democracy side of Thai politics. 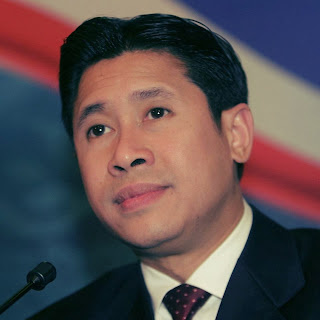 I stated out asking Jakrapob to tell readers a bit more about how he ended up in Cambodia and what he is doing there now.


Actually, I haven’t stayed in Cambodia as a permanent home. Cambodia is one of many places of stay for me, and I return to it rather often. In 2009, when I made the decision to leave Thailand, I came through several countries and ended up staying in Cambodia for some time. The Cambodians understand our plight, and their experience during the war years helps greatly. However, I move around quite a lot, but never too far from Thailand.

How was the recent Preah Vihear ICJ ruling received in Cambodia? Is more conflict between Camodia and Thailand possible?

The Cambodian leadership seems to see such a conflict as Thai elitists’ perception of their neighbouring countries, as opposed to a legitimate border issue. Cambodia’s PM Hun Sen always says that the peoples of Thailand and Cambodia are never in conflict. It is Thailand’s upper class position that Thailand should give itself a safe distance from all four neighbouring countries, which can be explained as an age-old misconception. Cambodians in general can not care less about such issue, except some living near the borders. Vietnam is actually more on their mind.

What is your view of recent events in Thailand?

When things do not fall into place, you have a mess in your hands. I am sorry to see my once-peaceful country erupting into turbulence. However, true changes in Thailand have been subtly and discreetly suppressed for so long, under a disguise of smiling Thailand. The Thaksin phenomenon releases the whole country from such hold-up. We should not be so surprised that entering such a period is necessary. For me, it is long overdue. You can’t remain so cute in the face of a national soul-searching.

Was the blanket amnesty a mistake?

It was initiated out of a good intention to give the whole country a place to re-start. But the mannerism of the process and the bluntness prove to us that a good idea can turn awful. The idea itself was not a mistake. But its timing couldn’t be more troublesome.

Can you ever see true justice for the victims of 2010?

Yes, but only if Thailand’s democratisation is allowed or pushed to march on. With the current state of hidden dictatorship, who is seeking every opportunity to overthrow a democratically-elected government, we can’t see justice now or ever. Dark forces of Thailand are pretty well packaged as benevolent and hard to see. But they are there to obstruct all kinds of attempt to give people an edge, especially for those brutally killed by their forces and/or the network.

What could be done to reform or repeal the lese majeste law?

One must link Thailand’s political crisis with the role of the palace network, both by themselves or referred to. If such link is adequately established, I think people at large will see by themselves why such laws exist and heavily persist. Actions will follow.

Does the Red Shirt movement have a future if it stays aligned to Thaksin?

Thaksin is and remains an important ally of the entire democratic movement. I think he will benefit a great deal by remaining attached, qualitatively, with it.

How could a genuine process of “reconciliation” take place in Thailand?

Now it is even more hard to say. An explosive rift over the amnesty bill has been a very recent reminder that the Thais are still very much far apart. We must allow the natural process to go on for a few more rounds before a new shape is formed. By then, a talk about justice and reconciliation may be possible.

Should Thaksin retire from politics or does he still have a role to play?

He remains and will remain a larger-than-life figure in the whole transformation. It is entirely up to him how he will play up, or down, that role. Personally, I think his senses of perseverance and skilled management continue to serve him well in this circumstance.

Can you see yourself returning to Thailand in the near future?

Not really. My political usefulness is better served outside Thailand’s power sphere for now. But returning home is never missed from my agendas.

If so, what role would you like to take on?

International and intellectual roles, I suppose. The international community remains quite ignorant of the real root causes of Thailand’s politics, and it is essentially our own fault. I think I can play a role of an explainer as well as an awareness raiser. As a former professor, I can write, speak, and create a body of works to enhance Thailand’s democratisation from afar. There are some areas we can do a lot better.

Posted by Asia Provocateur at 11:30