In the days since the Thai coup of May 22nd 2014 the military has sought to crush all opposition using increasingly repressive means.

Many former pro-democracy leaders and activists have been seized by the Thai Army, threatened with a variety of draconian consequences and then released back into the community, many under what amounts to de facto house arrest.

However, outside of Thailand a small group of pro-demcracy activists are now gathering and assembling what has been initially labelled as a "Thai Resistance" to the military junta.

One of the key figures emerging in that resistance is former Thai cabinet minister, Jakrapob Penkair, who has been an exiled dissident since 2009, when he was charged under Thailand's brutally oppressive lese majeste law. 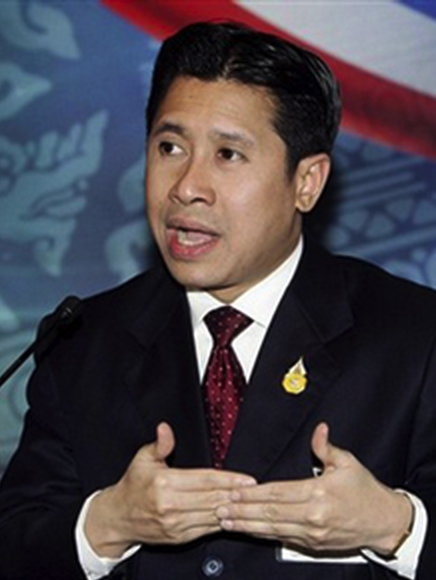 You've stated that a resistance to the Thai junta is being created - can you give any more details regarding that?

There are some of us: cabinet members, former members of parliament, red-shirt leaders, and political activists, who never think of recognising the criminal coup makers in Thailand and of surrendering to them. Plus there are some of us already outside of Thailand. We all join hands and are in the process of organising a movement to resist the coup, and to return Thailand to democracy as soon as possible. There is no finalising on its name, location, and the revelation of any founding names yet, but the organisation will definitely be formed within the month of June 2014.

What will be your role in this resistance?

I will be its Executive Secretary.

Would you negotiate with the junta or do you consider them to be completely illegitimate?

They are not only illegitimate but illegal and criminal.

A photo has appeared of various anonymous authority figures - from army, air force, navy, police etc - making the three-fingered anti-coup symbol - what would be your message to persons who are part of the coup authority who are uncomfortable with the Thai junta?

I just want to say: we saw you, we heard you, and we are soon to be with you. Your brave hearts are our most valued and effective weapon to turn the situation around.

How repressive is the junta-regime being right now?

This bunch are the most repressive regime since Field Marshall Sarit Thanarat's bloodiest dictatorship regime. People are killed, hurt, violated, bullied, and threatened as never before in recent memory. I believe this stems from them realising how wrong they are. The huge misstep makes them commit crime and mistake one after another.

Do you think violence is likely?

I am afraid so. But the people's side never wants violence. We demand elections only. However, how can one maintain a social order and peace when the bullies are in control and violate almost every human right?

What would be your message to those who may seek to engage in violent acts against the junta?

Be patient. We are facing a killing machine, and a democracy-based group / movement is always naturally inferior to fight such a machine. We are simply not well-equipped that way. We must put out our ideologies and principles first. Make the whole world understand our plight and their sins. Then this war may be won even before it is fought.

Do you have anything to say to the Thai community overseas who are anti-coup?

You have a friend in us. Don't you feel lonely or discouraged.

And what would you say to those persons protesting against the coup on the streets of Bangkok?

We salute your bravery and true love for the country. However, stay safe and do not risk yourself too much. We need every one of you during the longer battle for our human dignity.

Do you have a message for the junta leaders?

We actually do not want to fight you who are only the servants. However, you are in the way and refuse to leave, one must go through you to get to the real culprits, who are the privileged classes refusing to let Thailand grow up and enter adulthood.

Posted by Asia Provocateur at 14:04