An air of desperation seems to be creeping into the Democrat Party leadership of late.

Not only are Abhisit and Suthep facing a possible criminal investigation regarding the death of an unarmed Red Shirt taxi driver in 2010, it's also been revealed, once again, that their brutality is matched only by their incompetence.

Amid looney accusations from Democrat Party deputy leader, Korn, that Yingluck's government is like "Hitler" and off the back of this weekend's Pitak Siam protest debacle, when protesters drove trucks into police lines and threw tear gas, Abhisit's party is foolishly attempting to take some kind of moral high ground.

However, no-one is fooled by the Democrat's silly posturing. Least of all a group of elderly peaceful cassava farmers who had the temerity to protest against the then Chuan Leekpai Democrat Party-led government on October 27th 1999. Back then the Democrats sent these farmers a message they'd never forget - they set a pack of German Shepherds on them. 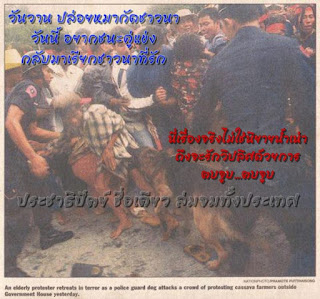 Of course the Abhisit regime's appalling and brutal handling of protesters in 2010 overshadows this event by some margin. In 2010 the Democrat Party set the snipers loose and shot unarmed civilians just like 17year Samaphan "Cher" Srithep in the video below, who was left to bleed to death on a Bangkok street.

Posted by Asia Provocateur at 10:43