UPDATE 2: We've now found another source of the video of the attack (h/t to "Dan") on the Red Shirt vendor. It's quite clear that the crowd is whipped up into quite a frenzy. Maybe it's only a matter of time before the royalists start hanging people from Bangkok's trees again?

UPDATE: It seems like the video has now been removed. We do, however, have a photo of the vendor being attacked below and the screen grab of the opening frame of the original video. The first picture is from a bizarre Facebook site called "Dislike Yingluck for Concentration Citizen" and includes various death threats by a variety of Thai royalists. One by a Ta Piyawan states in Thai that the vendor should be "detained" and then taken away where, after the royal celebrations, the vendor can suffer some "harsh treatment" and turned into "fertiliser". 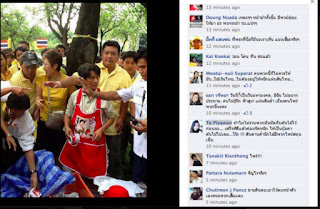 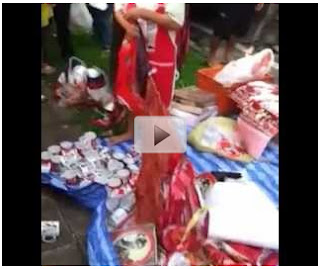 As 1000s of Thais gather today in Bangkok to pay homage to the Thai king on his 85th birthday it didn't take long for the more fanatical royalist element to make their feelings known.

A single female street vendor near Kasetsart University had the temerity to sell a few products showing the picture of the elected Thai Prime Minister, Yingluck Shinawatra and to wear some red coloured clothing.

As can be seen from the following video, the vendor was surrounded by an enraged mob who screamed abuse and attempted to damage the vendor's goods.


This is fairly typical behaviour from Thailand's royalists who have a long record of using extreme violence, threats and intimidation against those who dare to dissent against the dominant royalist view.

Luckily, on this occasion, a police officer steps in to protect the woman. In the past, royalists such as the Red Guar, have been involved in terrible massacres such as the one at Thammasat University in 1976.

Posted by Asia Provocateur at 02:17