We have received this open letter from the Secretary General of the anti-coup Free Thai movement, Charupong Ruangsuwan. His letter reflects on the repressive tactics of the Thai military regime and lambasts the "war weapons" accusations placed against the Free Thai movement's Executive Secretary, Jakrapob Penkair, by the junta's agents. 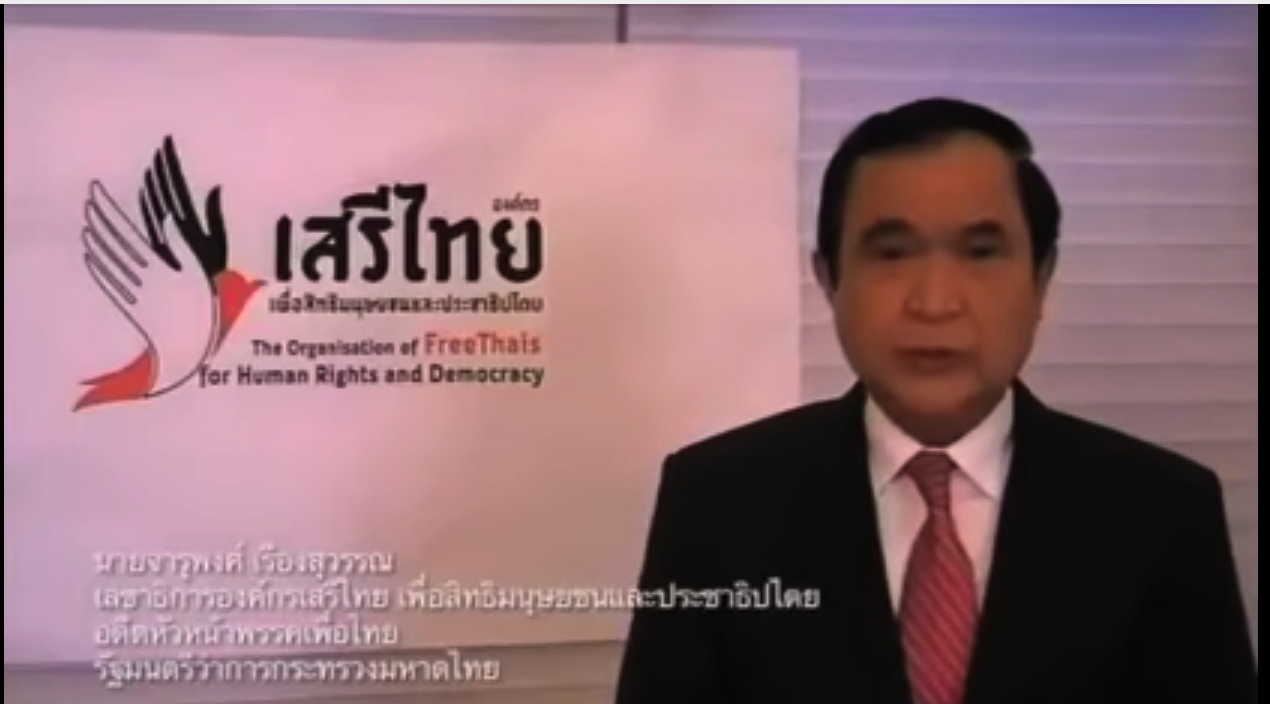 "Greeting to all freedom-loving Thai friends,

The very best weapons of ordinary, unarmed Thai people during the junta’s repression, is your sincerity and your love for justice and human dignity of all Thais.

Since the very first days of the military coup, the junta has attempted to fabricate many stories in order to destroy the faith in freedom and democracy of our Thai friends who’ve stood up against the repression. Most recently, the junta has pressed false “war weapon” charges against one of the founding members of our Free Thai organisation, Jakrapob Penkair. They have done so without any evidence.

This dirty tactic is no different from the one that the junta used against the students in the past. On October 6, 1976 at Thammasat University, they used fabricated war weapons “seizures” as their justification for massacring peaceful protesters. The passage of time revealed the truth and proved that these stories were fabricated deceits created to crush the people who were opposed to the military junta.

At the moment the dignity of the country and of Thai people has fallen to an unprecedented low level.  This dignity has been stolen by the junta, who are attempting to shut our eyes and ears to the truth and prevent us from being aware of our collective struggle against them. In addition the junta regime is desperate to prevent Thai people from knowing of the pressure the international community is placing upon them. The junta has shut-down TV stations and community radio stations and is attempting to control the remaining news content by stationing its soldiers at media broadcasters and outlets to ensure that only pro-junta news is produced. It has summoned and intimidated journalists, academics and even ordinary Thai citizens who use social media, in order to curtail freedoms of the press and to control dissemination of information.

Thais who love and want to protect freedom - and who do so without resorting to force of arms - are committed to telling the truth no matter what the profession, age, or gender of the persons involved. People should expose and utterly reject the junta’s prison of deceit, a creation designed only to subjugate the people.

We ask our supporters and any other persons drawn to the democratic ideals of the Free Thais’ movement to distribute information from our social media networks to their neighbours, friends, family members, brothers and sisters and even international organisations. We must make the truth echo loudly, so that those with a free conscience are reminded that the junta can’t just buy our friendship and love for the truth so cheaply, and thereby use such tactics to further persecute us.

My beloved Thai friends, we will continue working together to create a framework of ideas that can help take the country forwards towards democracy. Every Sunday, for the sake of freedom and humanity for all Thai people, we will distribute a Free Thais newsletter in order to tell the truth and fight against the deceit of the junta. And when the time comes, we will walk together, standing-tall with straight backs, filled with pride and belief in the equality of all humans, once again.

With faith in the power of democracy and of the people,

FreeThai
The Organisation of FreeThais for
Human Rights and Democracy"

Posted by Asia Provocateur at 01:40