When Boris Johnson met the Butcher of Bangkok; yet more Abhisit lies

As noted by several other posts in this blog Abhisit's visit to London hasn't gone terribly well.

Only last week the Butcher of Bangkok, former Thai PM, Abhisit Vejjajiva, was charged with murder relating to the death of an unarmed protester in Bangkok in 2010 after he ordered a bloody military crackdown on pro-democracy protests that resulted in almost 100 deaths. (WARNING The video footage here and here of clearly unarmed protesters being shot by Thai soldiers is harrowing and very graphic).

From UCL students cancelling and then reinstating his appearance at the university, to his bizarre claim that he was "invited to speak by the UK Parliament", followed by his butt-clenchingly bad interview with the BBC's Mishal Husain it's not been a great few days for Mark.

But there's more. With Abhisit there are always more misrepresentations and lies to debunk and the latest is his visit to the Greater London Authority (GLA) and the Mayor of London.

As we can see from Abhisit's Facebook page here (screengrab below) he seems to be suggesting that his GLA visit was was some kind of very important high profile official visit.

Well, it will probably come as no surprise to readers here that Abhisit misrepresented this too.

I was in contact with the Mayor of London's press office during the day and they confirmed that Abhisit and the Mayor's meeting was not official in any way, shape or form.


This was a private meeting between two men, Mr Vejjajiva and Mr Johnson, who were at school together.

The well-known and respected blog on London politics, Snipe London also picked up on the story with a headline that said 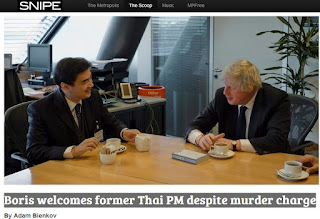 So what was Abhisit actually doing in London? He had no real official engagements apart from the ones he made up in his head and just to seemed flit around in a desperate attempt to appear relevant. It's quite a sad and sorry spectacle and one can only hope that he gets the chance to spend plenty of time in the future defending himself from that troublesome murder charge.

Posted by Asia Provocateur at 11:55